Steven Herrick is one of my favourite authors. His gentle humour and vibrant characters bring both light and heart to difficult topics. The Bogan Mondrian deals with themes of grief and domestic violence.

Herrick’s writing is always unashamedly Australian and personally, I love this about his books. The Bogan Mondrian is set in the Blue Mountains where Herrick has lived since 1994. I might add that Herrick was born and bred in Queensland and I always feel this Queensland connection whenever I read his books – notably his sense of humour which features in all his work and despite the heavy themes of The Bogan Mondrian Herrick adds humour to this story which helps to balance it out.

‘Absenteeism…’ he repeats.
‘A scourge,’ I finish. Charlotte is a bad influence.
Cue loud exhale.
‘You will both report to Mr Dexter,’ he checks his watch again, ‘at lunchtime, for one week of detention. An email will be sent to your parents.’ He looks at me meaningfully. ‘I’d welcome a meeting.’
‘There’s only Mum left,’ I say.

He offers a stage-managed cough. ‘Yes, I’m well aware, Saunders. I believe you mentioned that last time you were in here.’

‘My dad’s alive,’ Blake adds, perhaps trying to be helpful. ‘But he lives in Queensland.’

When the book opens, we are introduced to Luke. A young man who lost his father to cancer and despite losing his dad two years ago, Luke’s grief is still raw and real. Since his dad’s death, Luke has lived in a fog and he is meandering through life with no direction. As a result, Luke spends much of his time wagging school and swimming at the reservoir. Luke doesn’t hate school but thinks it is boring and pointless. But when Charlotte, a young woman from a wealthy family, comes into his world, he realises there are worse things than school. Charlotte’s father beats his wife.

In reading a piece that Herrick wrote for Reading Time, he had this to say about choosing Charlotte’s family as victims of domestic violence.

The choice of a well-to-do family was deliberate – domestic violence affects people from all classes, races and religions. In the novel, Luke becomes a catalyst for Charlotte confronting the violence happening behind the neatly-trimmed hedge, circular driveway and security door. I chose a teenage boy and girl because this is not a women’s issue – the notion of masculinity and our propensity to violence is for us to understand and fix. I hope Luke is an example of male strength, kindness and empathy. I hope he’s a believable antidote to the destruction wrought by Charlotte’s father.

Charlotte father is a charismatic, attractive and successful man. When Luke first meets him, he questions Charlotte’s story. The man he meets doesn’t fit the version that Charlotte has given him. Luke starts to disbelieve Charlotte. Charlotte’s father is protected by his wealth, his status and his persona as a “good bloke”.  Herrick shines a light on so many facets of domestic violence. Men who hit their wives don’t always look like monsters and don’t always come from the wrong side of town.

As we all know, violence against women is about power. Herrick shows in The Bogan Mondrian what happens when the power is taken away. He encourages us to think about how we can take power from these men. Luke and Charlotte took away Charlotte’s father’s control. Herrick admits that how this was achieved in The Bogan Mondrian is not a solution to domestic violence. Domestic violence is complex and different for everyone experiencing it – to say that there is one solution is to simplify the issue and Herrick doesn’t want to simplify the matter. He wants to show how, as individuals and as a community, we can flip the power away from these violent men.

I’ve always admired authors who can give us fleshed out minor characters and Herrick does this beautifully. The Bogan Mondrian has a stellar cast. There is Rodney, the car thief who is both shady and kind. Luke’s best friend, Blake, who isn’t the sharpest tool in the shed but his goodness shines through. There is the librarian, Tracey, who shows Luke where to find information and give him moral guidance and Mr Rosetti, who is teaching Luke how to swear in Italian.

The Bogan Mondrian is a sensitive and beautiful story that highlights an issue that affects 1.5 million Australians, but most importantly, Herrick gives us Luke – a lovely young man who hopefully is our future. 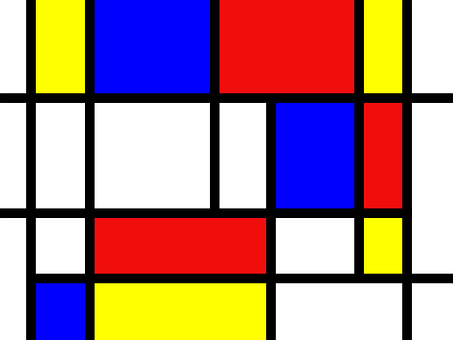