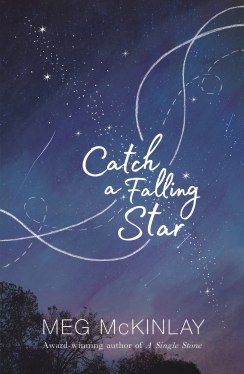 Meg McKinlay is an exceptional writer. Her books are both heart-wrenching and very funny. Her new novel Catch a Falling Star is stunning. I knew I was going to enjoy this book from the first page.

Jeremy’s wearing the bowl and a puffy jacket because it’s the closest he can get to a spacesuit. And he needs a spacesuit because he’s going to be an astronaut when he grows up, just like Damien last week, and Trevor the time before. I don’t know what the odds are of three kids from the same class in a tiny little town on the south coast of nowhere, Western Australia, becoming astronauts, but it seems like they’d be…astronomical.

Yes, this book is poignant and heartfelt, but it is also hilarious. I work in an all-boys school (mainly in the junior school) and emotionally moving won’t it cut it with the boys. I need to be able to sell these books, so humour is good. Grab them with humour and space and then let them discover a story which will give them so much more.

Catch a Falling Star is set in a small town in Western Australia, in the year of  1979. As I was reading this novel, I thought it would be a wonderful book to read aloud to students. To discuss what life was like in 1979 for children their age. No mobile phones, not a lot of technology, no Internet.

It is 1979 and Skylab, the U.S. space station is starting to break up and will re-enter the earth’s atmosphere. NASA can’t control Skylab and so no-one, including NASA, have any idea where the pieces of Skylab will land. They do know that Western Australia is on its flight path. I loved this part of the book because it is the 1970s and there’s no such thing as social media or a twenty-four-hour news cycle, so the public is relying on the nightly news report and their daily newspapers to give them their information. Imagine. Skylab dominates the news and everyone is talking about it.

Everyone is obsessed with Skylab and none more so than Frankie Avery and her younger brother, Newt. Frankie and Newt’s father died several years earlier in a plane. It too fell out of the sky. Their father loved space. Frankie spent many hours with her father star-gazing and talking about space. She remembers her father telling her about Skylab and now it is falling to the ground. Skylab brings back many memories for Frankie and she finds it all quite overwhelming, particularly since her mother doesn’t talk about her father anymore and all she does is work long hours at the hospital.

Newt was too young to remember their father, but like their father, he is fascinated by space. He is a curious, incredibly smart eight-year-old who loves science. Frankie’s mother isn’t home much, so Frankie looks after Newt. She worries about Newt and sometimes forgets to be a twelve-year-old because she is too busy looking after Newt who has no sense of danger and like most eight-year-olds lacks a lot of common sense.

Frankie is dealing with a lot. She is negotiating school, family, friends and grief. The book is beautifully written, but I love the humour that McKinlay provides in the book to lighten the mood at times. Most of this humour comes when Frankie is in class with her teacher. Adults and students will relate to the humour in the classroom.

As Skylab continues to fall to the ground, Frankie feels her life starting to spiral. The falling of Skylab triggers Frankie and everything comes to an emotional head as Skylab enters the earth.

I thought I would end with my favourite quote from the book, for all the readers out there!! Throughout the story, Frankie is reading the Australian classic Storm Boy by Colin Thiele. A book that parallels Catch a Falling Star in that they are both about growing up and handling grief at a young age.

“What’s it about?” She gestures at the cover. “A pelican.”

I  hesitate. People are always asking that about books: “What’s it about? It sounds like a simple question, but it isn’t. You could take all day to answer it if you really wanted to. And if the person asking the question really wanted to hear it.