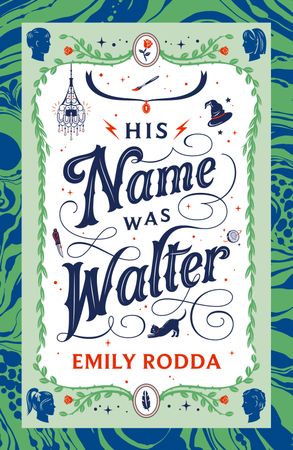 From Australia’s favourite storyteller comes a story, within a story, that shows us the extraordinary power of true love and solves a decades-old mystery. ‘Once upon a time, in a dark city far away, there lived a boy called Walter, who had nothing but his name to call his own …’ The handwritten book, with its strangely vivid illustrations, has been hidden in the old house for a long, long time. Tonight, four kids and their teacher will find it. Tonight, at last, the haunting story of Walter and the mysterious, tragic girl called Sparrow will be read – right to the very end … From one of Australia’s most renowned children’s authors, comes an extraordinary story within a story – a mystery, a prophecy, a long-buried secret. And five people who will remember this night as long as they live.

What an amazing book! I love Emily Rodda when she writes in this manner – encompassing touches of yesteryear, folklore, fantasy, reality and mystery.  Everything about this book is divine – the language, the characters and the writing.

Emily Rodda has written an excellent novel where four children and a teacher on a history excursion get stranded overnight in a scary house and they find a book and become enthralled by the story of Walter.

When I started this book, I didn’t have high expectations, but I soon became mesmerised by the story or more particularly the story within the story.

The story within the story at first seems like nonsense – a boy raised by bees, who work for mice, meets a witch who turns into a cat, lives with a landlord who’s a chicken and falls in love with a young woman who turns into a sparrow. At first, I started to think that my reservations about this book were justified, but soon I was caught up in young Walter’s story and I was utterly captivated and like the four children on the excursion who have found the handwritten book I couldn’t put this book down.

What I loved the most was that as a reader I was given an active role alongside the school excursion children in solving Walter’s fascinating mystery. The way Emily Rodda incorporated the reality of the day with the handwritten story of Walter was terrific. What a skilled writer!

His Name Was Walter will bewitch readers with its fantasy and mystery elements and then Rodda ties it all up with a neat, beautiful bow. Absolutely enchanting.